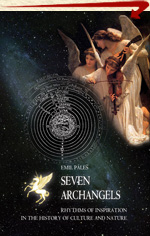 RHYTHMS OF INSPIRATION IN THE HISTORY OF CULTURE AND NATURE

Click on the PayPal button below to buy this book here directly from the Sophia publishing house. Shipping takes 21 days overseas, 14 days in Europe.

At a time when even high church officials no longer conceal the fact that their belief in angels has ceased, there has been a surprising turn of events: scientific research brings us a wealth of proof that the medieval teaching about angels was right after all. Creative personalities throughout history have drawn inspiration from mysterious depths of soul - and they have captured simultaneously, and across the whole world, the same aesthetic, philosophical, religious and constitutional impulses. Regardless of whether they are atheists, Christians or Native Americans, they have given accounts of identical or similar inner revelations. These revelations correspond to the traditional archetypes, angels and deities; and in history they alternate in a cyclical chronological order that was still known to medieval Christian and Arabic scholars and which has been handed down from the treasury of ancient Babylonian temple wisdom.

The conclusion of the Bratislavian mathematician and sophiologist Dr. Emil Páleš is clear: angelology was not a speculation! This follows from a more than 15-year-long complex research into waves of creativity in history, using exact methods of mathematical statistics. Expert opponents have had the wind taken out of their sails and the Church is ill at ease. Age-old wisdom has taken wing and risen like a Phoenix from the ashes, rejuvenated and more radiant than ever before.

graduated at the Faculty of Mathematics & Physics at the Comenius University in Bratislava. Thereafter teaching at the Chair of Artificial Intelligence. In 1989-1994 head of the research project "Computational model of Slovak language" at the Institute of Linguistics of the Slovak Academy of Sciences, where he defended also his PhD. thesis in philology.
Since 1994 he founded and is leading the Sophia foundation. Seven years editor-in-chief of the Sophia journal quarterly. He ranks among the few representants of sophiology in the world. In his work he carries on Solovjov`s effort for the synthesis of sciences, humanities, arts & religion as well as the idealistic biology of Goethe and Portmann. Of his research the discovery of periodic and synchronous time-patterns in history and in the evolution of nature are of fundamental importance.

Science rediscovers angels
The picture of the world • Do angels exist? • The seven archangels and the wheel of time • Waves of creativity – a mystery of anthropology • Angels and evolution • On the track of a universal law Angelology of history •

Raphael
The archangel of Mercury • The patron of physicians, botanists and linguists • The geological age of Mercury. The birth of Gothic • The inspirer of rationalism and the Enlightenment • The joker and protector of youth

Anael
The archetype of love and beauty • The spirit of puberty • The muse of fine arts. Soul copper • Compassionate saints • Romantics, mystics and revolutionaries • Patron of alchemists

Oriphiel
Soul lead • The geological age of Capricorn • The patron of hermits and emperors • Oriphielic geometry: the circle • Saturnian sciences • Every man is the architect of his own fortunes

Musical and artistic portrayal of angels